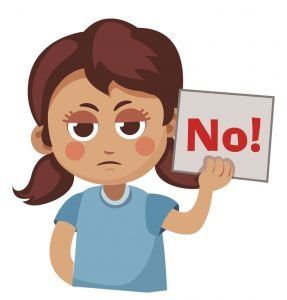 One of the essential behaviors an expecting parent (or current parent) can do is to stand in front of a mirror and practice saying the word, “No.” It is impressive that so many parents seem to become unable to speak when confronted with a situation in which the word “No” is the only logical sound they should utter. You can say “No” with a frown, a smile, and any expression in between. A mom or dad can shake his or her head for emphasis, and it is also okay to add a hand or arm movement. One frequent such action involves raising one’s hands toward the sky while shaking them back and forth.  The only unacceptable use of the hands is holding their palms together as if “pleading” with the child.  The reason why it is critical to establish very early on that “No means No,” is so that the parent can say no without an accompanying fear of how the child may react.

As parents, we base far too many of our decisions, both the common everyday ones and the more far-reaching ones, on a fear of what will happen when we go to set a limit. While we do consider the child’s feelings, there has been such an over consideration for the child’s feelings that we as parents have become at times frozen solid, unable to think or act.

Setting clear and appropriate age limits, imparts love, and security to your child. The absence of setting limits can scare your child. He or she needs to know that you are in charge and that while often you will say what the child is hoping to hear, “Yes,” they will also hear “No,” and they have to learn to deal with their disappointment and frustration.  I am not sure who first coined the expression “Killing with Kindness,” but it is certainly pertinent to this discussion.

Talk To Your Child With Confidence

The word “No” has to be delivered with a sense of confidence. Do not worry that your son or daughter is going to have a meltdown when you tell him or her that the curfew remains the same. Or that they cannot go in the car with their friend (who has been driving for three days). Or that you will not pull over to get ice cream (usually requested at the end of a ten-hour marathon day all dedicated to the child) is like addressing the ball on the first tee and pleading with yourself not to hit the ball into the picturesque lake on the left. You know where the ball is going, and you can predict that the child whose parent does not say “No” firmly and confidently will have a meltdown to beat the band. Naturally, as parents, we feel at our most significant level of risk when this meltdown occurs in public.

Children need to learn to deal with frustration and how to delay gratification, and the earlier they start to learn these lessons, the better. By illustration, let’s take a brief look at the concept of the Family Bed. If we surveyed one hundred families seen by this psychologist in which the adults and children share a bed, only a tiny percentage do so because of choice. It is often not a proactive decision, but rather it comes from the difficulty setting and STICKING WITH the decision on where the child will sleep. This psychologist did not have an issue when parents chose to share their bed with their children if that is in keeping with their parenting philosophy as long as adult needs for space and intimacy occur.  The issue becomes critical when parents are unable to enforce the rule they have set.

Do Not Give In

A number of bright and successful child psychologists have written over the years about the difficulty in keeping to one’s word in the face of tremendous pressure from a child. How many times have we heard parents (and often grandparents) sheepishly joking about saving for law school because the child, usually named “Joe,” is so relentless in arguing his case?  Nature or nurture or perhaps a combination. While Joe may have acquired some biological predisposition to become tenacious, it is more likely that Joe has learned to continue to argue until he gets his way. Joe has learned that while mom or dad may be able to hold the company line through two, three, or four “Rounds,” by the fifth time, his parent will “Cave.”

Although Joe may seem happy with the outcome, consider the harm that has occurred. Firstly, Joe’s parents may now be angry, and this anger and accompanying tension have seeped into the home and must be addressed promptly.   The parent may feel defeated and or resentful and deal with this by now avoiding his or her child. Sadly, the lesson to Joe is that the rules (of society) need not apply to him. He wanted something, asked for it, heard the word “No,” argued –pleaded perhaps kicked and screamed, and then got his way. What are the chances that if Joe’s first five years of interactions with his parents are similar to this scenario, that he will be ready to stroll into Kindergarten prepared to take on the many challenges that await him?

Examine Your Own Behavior

Limit setting is not merely something that you as a parent do for or to your child. It involves critically assessing your behavior and setting limits on yourself. The limit setting is a dynamic interaction between you and your child. By placing a clear limit on my practice as an adult, for example, saying “No” and sticking with it, I help my child learn to accept the structure I have imposed.   I am not providing my child with what he or she truly needs at that moment when I struggle with my child.

Setting limits also is essential when making a request, i.e., instructing your child to do something. Parents often share that they remain calm for the first three to four times they make the request and then end up quickly getting frustrated and angry with the child. Unfortunately, even simple routine applications such as,” Please turn off your I-Pad…lunch is ready,” or “Please put your laundry in the hamper” can somehow trigger significant arguments. Sometimes the child will comply, but sadly nothing has been learned.  The child is likely to repeat the scenario.

Be Clear And Consistent

I recall during a playing lesson turning to the pro in disgust and remarking, “I can’t believe I just hit that ball onto the next fairway.” He patiently responded, “Joe, the ball can only do what you told it to do.” Your child can only respond to you based on the set of conditions that you as the parent supply. If I close the clubface, I will hook the ball. Open the clubface, and I will slice.  However, take a nice and smooth, relaxed swing with a gentle and firm grip and enjoy the fruits of your labor.

Instruct your child in the same calm and firm manner, and you raise the odds significantly that he or she will respond appropriately. Let’s face it. If you want a robot you can buy one at the closest electronics store. It is reasonable to expect a child to respond to a request or instruction if not the first time, evidently by the second. Think about natural consequences. A child will learn to quickly “Save his game” if he/she knows that failure to act soon will mean the loss of the game. Keep in mind that when this happens, the consequence needs to be of significant duration. Six minutes is not substantial. Two days is. Have you ever been late to work because your child had to save his game? Please consider no game playing on school mornings.

2021 © Joseph Rabinovitz, Ed.D., P.A. All Rights Reserved.
Made with by brynhowlett.com